TNT has done it again. What you might ask? None other but create another incredible Johnson and Johnson Spotlight Presentation Movie, GIFTED HANDS: THE BEN CARSON STORY. 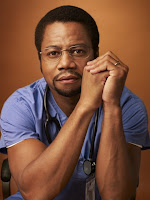 Based on the true story of Dr. Benjamin S. Carson, one of the world’s top pediatric neurosurgeons today. Cuba Gooding, Jr. steps into the role of Ben Carson in a way you will never forget as well as Kimberly Elise’s role as Ben’s mother Sonya.

When we meet “Bennie” in the movie, he is struggling in school and is ridiculed by other children-making it hard for Ben to control his anger. With the amount of prejudice Ben faces and struggles of growing up in inner city Detroit, it would be easy for us to see him give up on his dream of becoming a doctor. But with the love and support of his mother, Ben is able to push himself past anything that might stand in his way. Sonya is an amazing single mother who knows Ben’s true intelligence and abilities and motivates her son to work hard to accomplish what he wants.

In Gifted Hands, we see a young boy grow and push himself to the top of everything he does. Gifted Hands is a story filled with inspiration. The husband and I sat down together to watch Gifted Hands and both couldn’t help but smile as we watched Ben’s accomplishments after realized his love for learning.

Dr. Carson was the first doctor ever to successfully separated conjoined twins joined at the back of the head. Each patient that Dr. Carson has, he takes interest in and has helped many families. Honored and respected by many, he has also earned the Presidential Medal of Freedom.

To catch this inspiring and one of a kind movie, tune into TNT this Saturday, February 7th at 8 p.m (ET/PT) for the premiere of GIFTED HANDS: THE BEN CARSON STORY. You don’t want to miss this.
Ben CarsonCuba Gooding JrGifted Hands Movie
Previous Post Next Post

This site uses Akismet to reduce spam. Learn how your comment data is processed.

Looking to advertise? E-mail jenna@mommyjenna.com!Follow my blog with Bloglovin

This website uses cookies to improve your experience while you navigate through the website. Out of these, the cookies that are categorized as necessary are stored on your browser as they are essential for the working of basic functionalities of the website. We also use third-party cookies that help us analyze and understand how you use this website. These cookies will be stored in your browser only with your consent. You also have the option to opt-out of these cookies. But opting out of some of these cookies may affect your browsing experience.
Necessary Always Enabled

Any cookies that may not be particularly necessary for the website to function and is used specifically to collect user personal data via analytics, ads, other embedded contents are termed as non-necessary cookies. It is mandatory to procure user consent prior to running these cookies on your website.